Joe Eszterhas (József Eszterhás) was born in 1944 in Csákánydorozsló, Hungary, toward the end of World War II. Hungary – and Joe’s Hungarian parents – were on the wrong side of history and forced to flee Hungary after Germany fell and before the Soviets took over. Joe spent the first six years of his life in a refugee camp in Germany, the end of which he still remembers clearly. After being granted asylum in the United States in 1950, Joe arrived, with his parents, to Cleveland, Ohio – once referred to (incorrectly) as the ‘second largest Hungarian city in the world’ for the number of Hungarian immigrants that went to live and work there in the early 20th century.

Young Eszterhas’ father was a writer, receiving work at a Catholic paper in the infamously ethnic Buckeye neighborhood. But just because his family was surrounded by fellow Hungarians didn’t make Eszterhas’ life any easier – in fact, he was bullied and ridiculed for being a “DP” (displaced person) and a poor refugee. At first Eszterhas, whose mother was a shut-in schizophrenic who wanted to return to Hungary, felt more like a victim than someone welcome in the U.S. But as he grew older, he learned to fight and to turn the tables on his bullies – an approach that stuck with him throughout his life and served him well in Hollywood much later. Most people know Eszterhas not for his scrappy Hungarian background in Cleveland, but because of who he became – for better or worse – in Hollywood. His legacy includes writing and earning millions for 16 films that grossed over one billion dollars. But his legacy is also that of a tenacious street-fighter unwilling to give up his integrity in the face of various studio executives and directors.

In his youth, Eszterhas – who for a short while was even a Hungarian boy scout in Cleveland – first became a journalist, writing for the Plain Dealer and then for Rolling Stone magazine. He began to shed his ethnic roots at a fast pace, growing to love American football and baseball and the rock and roll of his era. He spent less and less time with the conservative and insular Hungarian diaspora and more time with his American colleagues embracing American culture. He remembers that in 1956, although he was only 12, he was afraid that his family would choose to go back to Hungary if the 1956 Revolution against the Soviets was successful (and it was, for roughly two weeks). Although he says he later regrets thinking it, he was hoping the anti-communist freedom fight would fail so he could stay in the U.S. Much later in life he would write one of his best screenplays about the heroism of the revolution, Children of Glory perhaps in an effort to redeem himself for having those thoughts as a 12 year-old.

On the one hand, Eszterhas was successful as a writer (also the author of numerous books including American Rhapsody and Hollywood Animal) and screenwriter. On the other hand, his work has been attacked for its content – and for the path his personal life took. Known for his excesses with alcohol, drugs and women, some of his writing for the silver screen bordered on the pornographic (Basic Instinct, Jade, Showgirls) and he became known as the devil of Hollywood. A devil whose films garnered huge profits at the box office and who many studio executives and actors were dying to work with. Reading Eszterhas’ book Hollywood Animal requires a strong stomach – and a strong interest in Hollywood gossip.

Yet the Hollywood animal was reborn – as a God-fearing Christian – much later in life. After Eszterhas moved back to Ohio with his second wife and four young sons (in order to give them a more ‘normal’ upbringing, as he tells it) in 2001, he developed life-threatening throat cancer and was forced to give up alcohol (half a bottle of whiskey a day) and cigarettes (four packs a day) and live a healthy lifestyle. Eszterhas suffered immensely, was unable to speak for nearly a year, and thought his life was over. On a walk one day, as he sat down on the curb in his Ohio neighborhood to catch his breath, he began to cry. As he was lamenting about how his life had changed and his struggle just to stay alive, he did the strangest thing – for him. He began to pray. It was then that he believes he saw a sign from God and that he was saved. He himself could not believe it – nor was he the only person skeptical about his ‘conversion.’ He began to join his church-going wife and children, and he even became his church’s crossbearer. 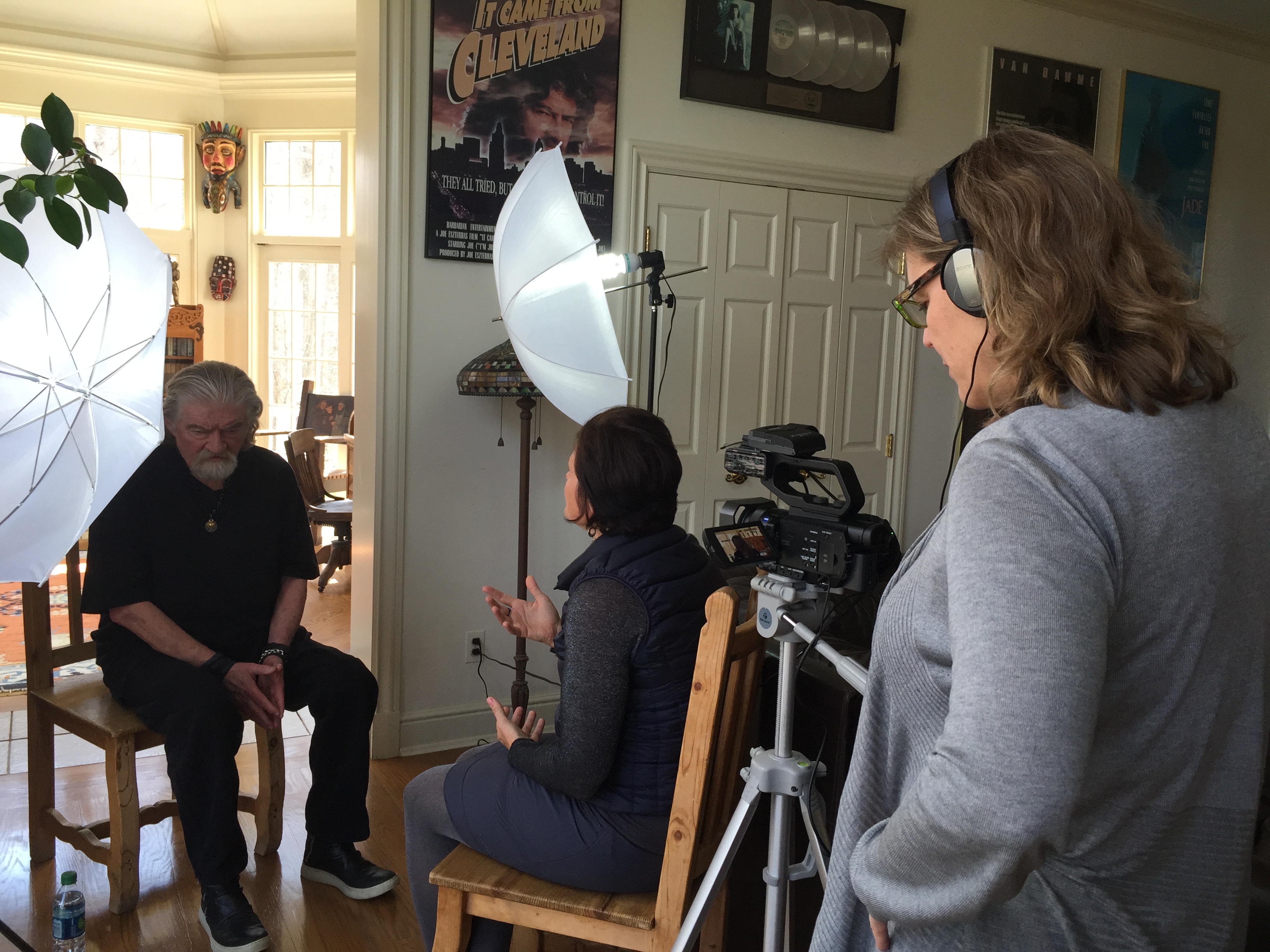